Simone de Beauvoir—acclaimed author of The Second Sex, and long time partner of Jean-Paul Sartre—was one of the most important figures in both feminism and philosophy. Since today is her birthday, Kristen Cochrane reminds us why she was such a bad bitch.

A hundred and eight years ago, Simone de Beauvoir was born. Forty-one years later, she would write The Second Sex, the 800-page opus that would tackle the question of what it means to be a woman. Philosophy scholar Barbara S. Andrew said “The Second Sex influenced all subsequent feminist philosophy”, writing that Beauvoir’s work intervened in not only asking what it means to be a human (a.k.a. what philosophy is), but asked what it means to be a gendered human (a.k.a. feminist philosophy). Beauvoir was a rigorous scholar of philosophy and writer of novels, essays, and even a play. Her life-long relationship with Father of Existentialism Jean-Paul Sartre may have shadowed her intellectual prowess, which Christina Howelis said surpassed Sartre’s own intelligence.

With that in mind, here are seven reasons to celebrate Simone de Beauvoir’s life. 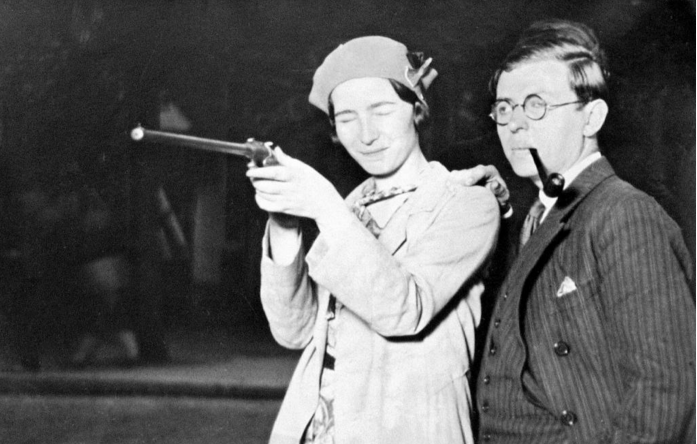 1. It’s believed that she wasn’t into the idea of marriage. In an exhaustive profile on Beauvoir and Sartre’s relationship in The New Yorker, writer and academic Louis Menand wrote that a “respectable but minority view among Beauvoir scholars” believed that it was Beauvoir, not Sartre, who called the shots in their relationship. “It was Beauvoir who rejected marriage, not Sartre, who felt lucky to have her on any terms; and it was Beauvoir who was the dominant partner intellectually, not, as she always publicly insisted, the other way around,” Menand wrote.

2. In 1970, she signed the Manifesto of the 343. In France, the Manifeste de 343 was announced, which held the signatures of 343 women who had admitted to abortions. Among them were actress Catherine Deneuve, writer Marguerite Duras, filmmaker Agnès Varda, feminist and lesbian theorist Monique Wittig, and of course, Simone de Beauvoir. It is said to have led to the 1975 legalization of abortion in France, despite being called the Manifeste des 343 salopes (Manifesto of the 343 Bitches or Sluts), a “joke” initially coined by Charlie Hebdo. 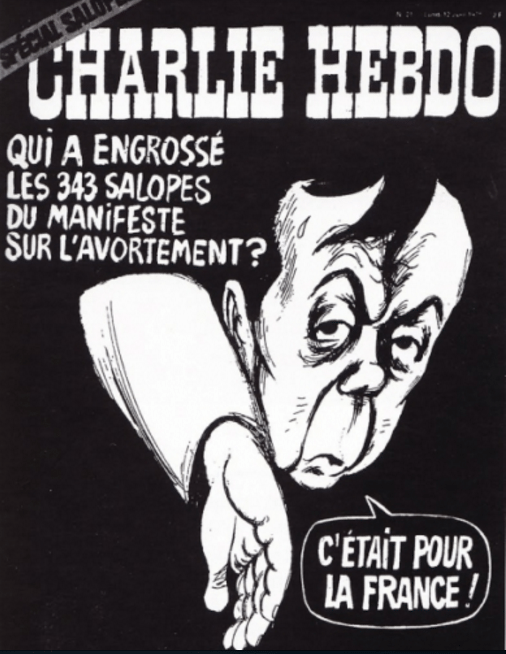 “Who knocked up the 343 bitches from the manifesto on abortion?” “It was for France!” Satirical French weekly Charlie Hebdo’s April 12, 1971 issue that conceived the “Manifesto of the 343 Bitches” (or “Sluts”), which was then taken up by anti-choice critics

3. She found an ally in Jean-Paul Sartre, who encouraged her to pursue how the female and the male experience differ (gender binaries weren’t shattered back then). When Beauvoir was reflecting upon the book which would become The Second Sex, she asked herself what it meant to be a woman. Like a lot of women today, she felt that she had never been discriminated against on the basis of her gender. But Sartre, taking the risk of being a White Knight or Mansplainer, told her that this is probably not true, and that she should think about how women and men are socially conditioned in different ways.

4. She argued against what she called the myth of the “eternal feminine.” This is a myth, or way of imagining, that we still assume today. We assume that women naturally embody particular characteristics, like having too many uncontrollable emotions, or that women have certain destinies, like motherhood. In the introduction of The Second Sex, Beauvoir points out the rhetoric of the time that said things like “Woman is losing her way, woman is lost” and “What has become of women?” Sadly, these kinds of essentialist statements are still prominent. What Beauvoir did, however, was point out the fiction of femininity—how it was simply made up and eventually became “truth.” In 1963, feminist writer and activist Betty Friedan used a similar expression, “The Feminine Mystique,” in the eponymously named book that is said to have started the second wave of feminism.

5. She was not a fan of the idea of motherhood. Beauvoir scholar Yolanda Astarita Patterson, who met Beauvoir in real life and interviewed her, said that witnessing her mother’s domestic toiling led Beauvoir to think of motherhood as imprisoning and stifling. “As a young girl, Simone de Beauvoir dreaded the prospect of being caught in the same uninspiring routine of daily chores which she saw draining her mother of energy and vitality,” Astarita Patterson wrote. Beauvoir addressed the narrative of mandatory motherhood that Astarita Patterson said has plagued Western society (and likely elsewhere) for over sixty years in the twentieth century. Fundamentally, we have “conditioned women to become wives and mothers and made those who rejected those roles feel somehow inadequate and incomplete.” 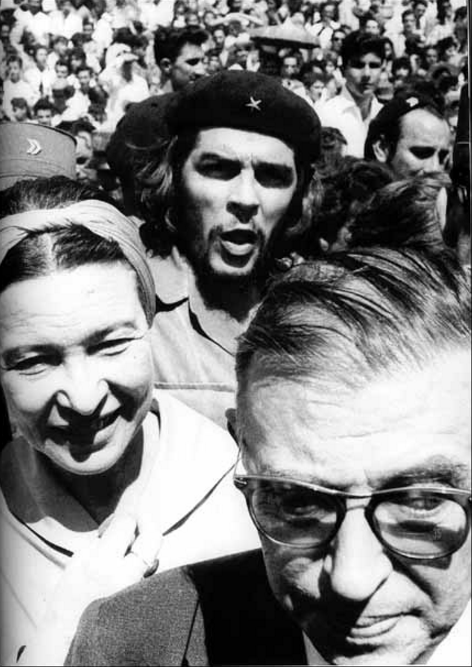 Clockwise from left: Simone de Beauvoir, Argentine revolutionary Ernesto “Che” Guevara, and her long-time lover Jean-Paul Sartre in Cuba in 1960. Sartre called this historical moment the “honeymoon of the revolution,” i.e., when the Cuban revolution had a lot of hope and fervor.

6. In her later life, she focused her efforts on ageism towards the elderly. In what is arguably the successor of her behemoth The Second Sex, her 585-page book The Coming of Age (La Vieillesse), Beauvoir outlines the ways in which the elderly face varying forms of oppression, particularly when comparing wealthier elderly people to lower-income elderly people. Her meditations on being an elderly person are far from cheerful, but it sheds light on systemic ageism that often goes unnoticed. “In the immense majority of cases, being suddenly flung from the active into the inactive category being classed as old, and undergoing a frightening drop in income and standard of living is a tragedy that has serious psychological and spiritual consequences,” she wrote.

7. She was deeply romantic. In spite of the tensions between notions of romance and women’s liberation (because romance is so intertwined with subordination of women—think John Cusack’s creepy “romance” in Say Anything as an example among many), Beauvoir was #cool with romance, but only romance that involves love. In an interview in with The Paris Review, Beauvoir was asked about the characters of her novels who seemingly cannot evade love. “Love is a great privilege. Real love, which is very rare, enriches the lives of the men and women who experience it.” 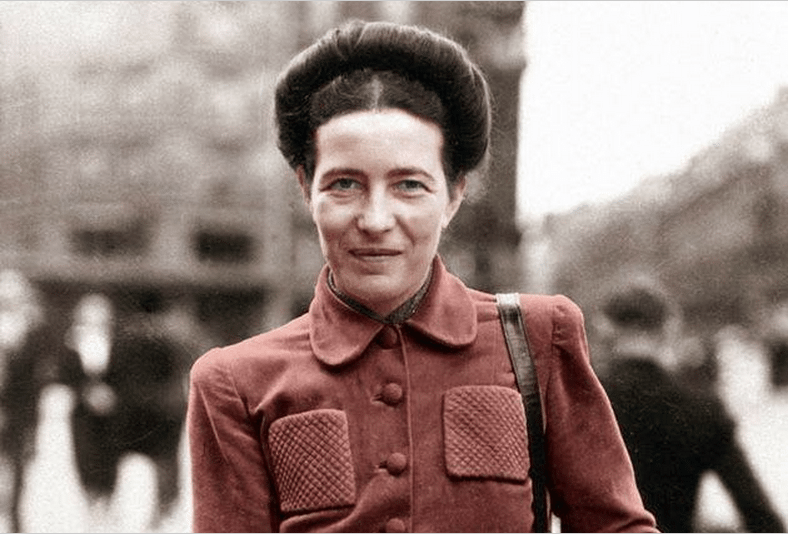 Kristen Cochrane is a writer and academic in Ontario, Canada, who’s researching some very interesting things, like queer Latin American cinema, and the fetishization of the female tennis body. Read her most recent essay for Slutever, about the queer gaze and the film Carol, HERE 🙂